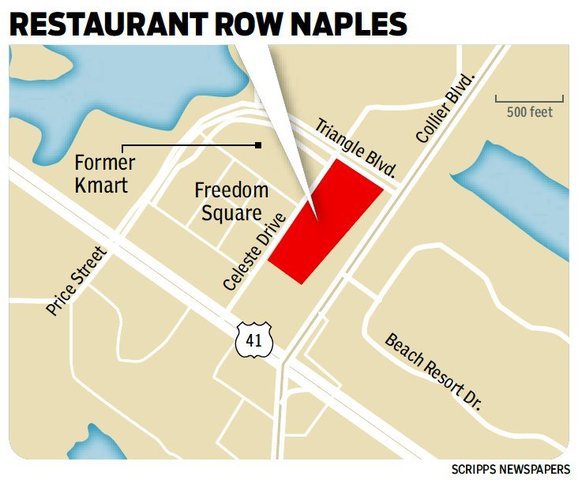 The developer of a 7-acre strip on the edge of Freedom Square shopping center on the corner of Collier Boulevard and U.S. 41 East plans to build at least nine restaurants there in a project called Restaurant Row Naples.

The developer of a 7-acre strip bordering Freedom Square shopping center in southwest Collier County plans to build at least nine restaurants there in a project being called Restaurant Row Naples. If all goes well, a 4-acre parcel nearby could host another three restaurants.

“The idea is to cluster the restaurants because it’s powerful,” said Charlie Ladd, president of Barron Commercial Development. “There’s synergy, so that people will have one place to go. In my opinion, that’s a big plus. The more you have, the more powerful it is.”

The land fronts Collier Boulevard on either side of Triangle Boulevard at the entrance to Publix-anchored Freedom Square. The strip stretches nearly to U.S. 41 East at a busy intersection about to get busier.

“It’s ironic that it hasn’t happened sooner,” Ladd said. “The area is completely underserved. The restaurants that serve communities all over the country aren’t there yet.”

Although one may have to squint a little to imagine a development taking place beyond the orange barrels and the staging area for perpetual roadwork there, Ladd has a clear vision. After patiently waiting, watching what he describes as amazing changes in Naples during the last 30 years, he knows the area is finally ready for Restaurant Row.

He’s not revealing much yet except that the area can expect a line of mostly national restaurant chains that already have a presence elsewhere in the county. These generally will be chains opening their second or third restaurants in Collier County, Ladd said.

The eateries will be welcomed by residents in that far-flung area who have craved more nearby dining opportunities for years.

A Starbucks drive-thru is targeted to open this fall in the first building to be constructed in Restaurant Row Naples, Ladd said. A drive-thru for Pollo Tropical will be in an adjacent building.

“We are going to try for all restaurants,” he said.

Although he is in the process of finalizing deals for the spots, Ladd said Starbucks and Pollo Tropical are the only tenants he can announce now.

“We have five food service guys that we are in final leases with right now. We are talking with a bunch of others,” he said. “More than a couple of them are 6,000- or 7,000-square-foot sit-down restaurants.”

The plan is to begin construction within 60 to 90 days and open the first businesses there this fall, Ladd said.

Ladd and his firm are familiar with that Collier corner. Many years ago, he bought the property to develop what would become the homes of Carrabba’s Italian Grill and AmSouth Bank, now Regions.

After waiting out the economic downturn, Ladd is ready for round two.

“For me, this is exciting because I started in 2000 buying that property,” he said. “I’ve been waiting for that intersection to come to maturity. It’s been 15 years.”

Carrabba’s, the first sit-down restaurant chain to come to that corner, is one of the brand’s busiest. Sister restaurant, Outback Steakhouse, followed its success and opened nearby last spring.

In turn, Restaurant Row plans to build on the success of these chains by introducing more of them in a convenient cluster offering a smorgasbord of choices.

Clustering restaurants, of course, is not a new concept. Malls have done it for years with food courts giving shoppers a menu of fast-casual options. In addition to Fifth Avenue South, the power of planting multiple food sources nearby to feed off each other has proved successful at regional centers such as Mercato, Coconut Point and Gulf Coast Town Center.

But, while common in the more urban areas of Naples and Fort Myers, it’s out of the ordinary to bring the restaurant clustering concept to East Naples, South Naples or whatever you want to call the nondescript region. It’s big news.

Donna Fiala, who has served that area as its Collier County commissioner for nearly 15 years, said her constituents perpetually have begged her to help bring restaurants — any restaurants — to that region.

“I think that people are not only looking for restaurants, but a variety of restaurants,” she said. “I think now they will be looking for some steps up. They now have to drive to the other end of town.”

Restaurant Row is further proof that — in conjunction with Freedom Square, Shops at Eagle Creek and the future developments of Tamiami Crossing and Triangle Plaza — the intersection of U.S. 41 East and Collier Boulevard is poised for a boom.

“People will be drawn to it. I think this will be one of the biggest intersections in the county,” Fiala said.

“This one is ready to become another Airport and Pine Ridge,” he said. “It’s Main and Main in the southern third of the county.”

Tim Aten, a Naples Daily News journalist since 1998, has written the newspaper’s popular “In the Know” column for more than 10 years. He previously was news editor and chief online editor for the Daily News. Before relocating to Naples, Tim was a managing editor of newspapers in the Florida Keys for 6 years. He and his wife of 25 years located to Florida in 1992 from Northeast Ohio, where he began his journalism career 30 years ago.