In the Know: Organically Twisted rolls into restaurant in Naples area 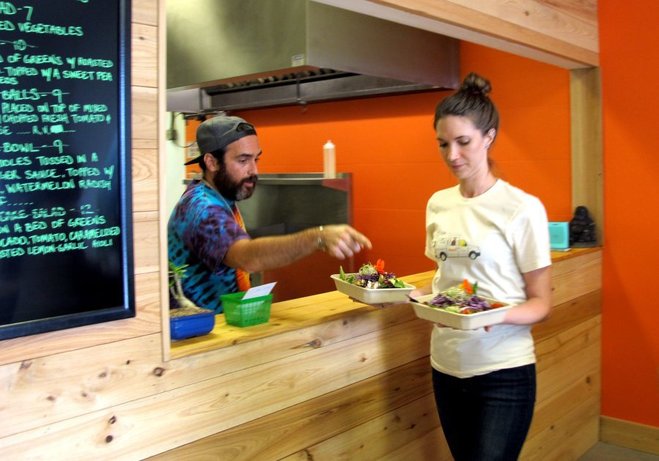 Chef John Hart, left, gives directions to a server doing the soft opening of his Organically Twisted on April 20 in Marquesa Plaza on the southeast corner of Livingston and Pine Ridge roads. Tim Aten/Staff

Chef John Hart’s personal vision has come to life as he begins the second chapter of his Organically Twisted food business.

After taking his culinary creations and positive energy to the people via his food truck since December 2013, the people can now come to him at his new brick-and-mortar eatery. Hart launched the Organically Twisted restaurant on May 2 in Marquesa Plaza, the retail center on the southeast corner of Livingston and Pine Ridge roads.

Based on a growing fan base for his mobile business during the last two years at area farmers markets, Hart has put down roots to showcase his culinary masterpieces. Organically Twisted has flipped on a bright spot in the nearly 1,700-square-foot former space of Moravela’s Pizza next door to Martin Fierro steakhouse.

“In order to keep up with demand and reach more people, I decided it was a natural progression to expand Organically Twisted to a larger and permanent space,” Hart said.

Combining more than 20 years of food experience with a passion for organic farming, Hart creates incredible, edible art with organic produce, seafood, spices, nuts, chocolate and other ingredients. Most of his entrées are “rolled or bowled,” served in a wrap or a bowl.

But just like a restaurant on wheels, specifics for Organically Twisted are difficult to pin down. The menu and hours are going to be changing.

“We are changing all the time, depending on what products we have,” Hart said.

No matter what Hart is serving, you can bet that his creations will be refreshing feasts for both the eyes and taste buds, and nutritionally healthy, as well. Organically Twisted offers fresh, organic specialty foods for grab-and-go meals to either take home or enjoy in the bright new eatery.

On a super soft opening April 20, OT’s menu featured at least 10 different items. Although you may not find these particular menu items or prices offered if you go today, this gives you an idea of what to expect.

To provide a better idea of what Organically Twisted has to offer, the food truck’s menu is available online at organicallytwisted.com/menu.

By the way, the opening of the restaurant doesn’t mean the food truck will be put on blocks. The truck will still be “rolling and bowling” for lunch at area farmers markets and other local events, especially on the weekends. For instance, the truck will continue to feed fans Fridays at the Collier County Government Center in East Naples.

“As for the truck when it’s out, they can view on the website,organicallytwisted.com under locations, which we’ll be changing everything,” Hart said. “As time goes forward, things will be changing.”

The hours of operation for the first phase of the Organically Twisted restaurant at 13040 Livingston Road are 11 a.m. to 6 p.m. Mondays through Thursdays.

“We have four days right now,” Hart said. “We’ll get that solved and we’ll have more things coming as time goes on.”

For the latest in local restaurants coming and going, see Tim Aten’s “In the Know” columns archived at naplesnews.com/intheknow, and on Facebook atfacebook.com/timaten.intheknow.

Organically Twisted restaurant opened May 2, 2016, in Marquesa Plaza on the southeast corner of Livingston and Pine Ridge roads. (Tim Aten/Staff)

Organically Twisted restaurant, pictured during its soft opening April 20, opened May 2, 2016, in Marquesa Plaza on the southeast corner of Livingston and Pine Ridge roads. (Tim Aten/Staff)