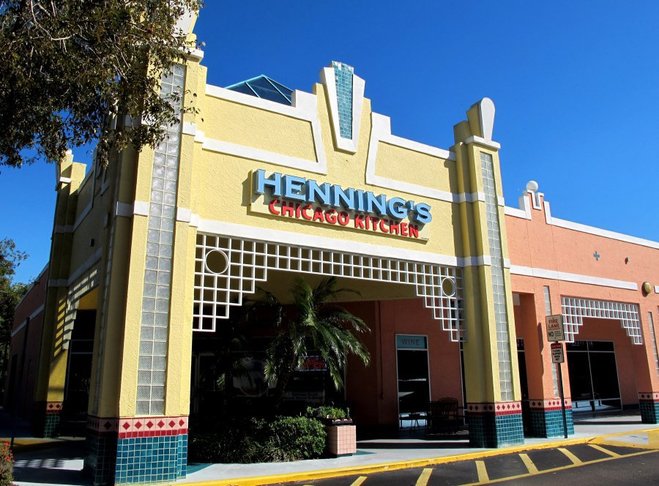 Henning’s Chicago Kitchen operated from November 2014 to April 2016 in Naples Outlet Center off Collier Boulevard. A new location is targeted to open this year in the Naples area. (Tim Aten/Staff)

After operating for a year and a half in the Naples Outlet Center off Collier Boulevard, the popular pizzeria closed April 29 in preparation to relocate 13 miles north to Pine Ridge Crossing on the southwest corner of Airport-Pulling and Pine Ridge roads, said Scott Henning, co-owner and chef of Henning’s.

“So many people have told us, ‘We love your place, but it’s just hard to get to’,” he said.

Henning is thankful to be moving his restaurant to a more central location in the Naples area, while leaving behind the outlet center.

Although not finalized yet, plans are in the works for Henning’s Chicago Kitchento take over the space now occupied by La Bamba Mexican Restaurant, 2360 Pine Ridge Road.

“We are working on the lease right now,” Henning said.

If all goes as planned, La Bamba will close its last Collier County location this summer, and Henning’s will move into its more than 3,500-square-foot unit near Beall’s in the shopping center anchored by Super Target and Publix.

“We are still working out the logistics now with the landlord. I feel very confident it is going to happen,” said Rodrigo Rinaldi, who with his brother, Mario, will continue to operate the other longtime La Bamba location at Miromar Outlets in Estero.

Their father, Guiseppe Rinaldi, turned 65 last year and is thinking about retiring from the local restaurant business he started here in the early 1990s.

“He’s ready to relax and enjoy Naples for what we came here for — the beaches and the sun,” said Rodrigo Rinaldi.

After initially growing La Bamba from East Naples to Bed Bath & Beyond Plaza in North Naples, Guiseppe Rinaldi moved his restaurant across the street to the larger space of the former China Tokyo when the longtime Chinese restaurant closed five years ago. La Bamba’s five-year lease in Pine Ridge Crossing is nearing its end, Rodrigo Rinaldi said, giving the family time to pause, regroup and rethink a little.

The brothers most likely will eventually reopen La Bamba in a smaller location elsewhere in the Naples area, he said.

“We are looking to probably do something again in the near future,” Rinaldi said.

The handoff of the restaurant space from La Bamba to Henning’s came about because Rodrigo Rinaldi and Scott Henning were friends and soccer teammates in the early ’90s at St. John Neumann in Naples.

“We grew up friends from high school times,” Rinaldi said.

When Rinaldi found out Henning was looking to grow his Chicago Kitchen in a more centralized space in Naples, he told his longtime friend that he may have just the spot for him.

“We had a chance to talk for a while and work things out,” Rinaldi said. “Scott is going to do well in that area.”

“To make it in Naples in this business for as long as they have is nothing short of miraculous,” he said.

Henning’s also is an extended family business that looks forward to changes a new location will offer, including doubling its seating.

The Chicago-influenced pizzeria also plans a full bar, including a Bloody Mary bar, to complement its previous beer and wine selections.

“People in Naples, I’ve learned, enjoy going out for a cocktail,” he said.

Henning intends to install French doors to open up the front of the restaurant near the bar to accommodate more outdoor dining, he said.

“That will make it a fun neighborhood place. I want to be the busiest place in Naples,” Henning said. “I want it to be an exciting and fun place to be. I’m excited that we have great food, and now we’ll have a great location.”

Although five deep-dish pizza varieties represent Henning’s specialty and set it apart from a plethora of pizzerias with thinner crust, its Chicago thin-crust pie rises above them.

“I thought deep dish would be the most popular,” Henning said. “The thin crust outsells the deep dish by 8 to 1.”

“We smoke the brisket for 18 hours and use cheddar instead of mozzarella,” Henning said.

Until physical work on his new restaurant begins, the hardworking Henning, 40, is clearly enjoying a much-needed break from the daily grind to take a breather with his wife and their three children.

“It’s been a year and a half and I basically haven’t seen my wife and kids,” Henning said. “So, it’s just nice to get to spend some time with them, take them to school in the morning and do homework with them at night, that kind of stuff.”

Of course, it won’t be long before Henning will be back at it, going mano a mano in a new Chicago Kitchen.

“If anybody wants to work as hard as I do, bring it on,” he said.

For the latest in local restaurants coming and going, see Tim Aten’s “In the Know” columns archived at naplesnews.com/intheknow, and on Facebook atfacebook.com/timaten.intheknow.

Henning’s Chicago Kitchen operated from November 2014 to April 2016 in Naples Outlet Center off Collier Boulevard. A new location is targeted to open this year in the Naples area. (Tim Aten/Staff)

One of the veggie deep-dish pizzas at Henning’s Chicago Kitchen. File